Post details of your T gauge layouts and the progress you are making.
Post Reply
15 posts • Page 1 of 1

I had the chance to physically visit a tiny village with a long railway history - Crianlarich - after a conference visit in Glasgow. This was only possible thanks to long daylight in the north in summer. Thanks to this trip, my T modelling activities have gained a certain critical mass again.

My general plan is to model some part of the West Highland Line in Scotland between Glasgow Queen St and Oban as well as Mallaig. As this is single-track and has rather small station layouts, it is well-suited for modelling. On the other hand, my N scale modular layout is already featuring a single track line with crossing loops and respective operations, so I would be keen to have some variations of that in T. Crianlarich is today a junction station, where DMU trains split up into two portions, each serving one of the two branches. This could be interesting to model. In the past the place even has been the crossing point of the Callendar-Oban line with the Glasgow-Mallaig line. This crossing had a large track layout. In a rather small area, four signal boxes could be found before Mr. Beaching closed part of the lines. Therefore, from about 1900 until today there have been many changes in the track layout and many modelling variations are possible. Also freight is an interesting option here, since one of the three stations in Crianlarich was used as a timber loading place and timber cars have to be shunted from the lower line to the upper line to move north to a paper mill in Corpach.
In June, I had just time to arrive in Crianlarich around 8 pm and leave again around 10 pm, so there was not much time to see all the remains of old infrastructure, but still time enough for many helpful pictures. 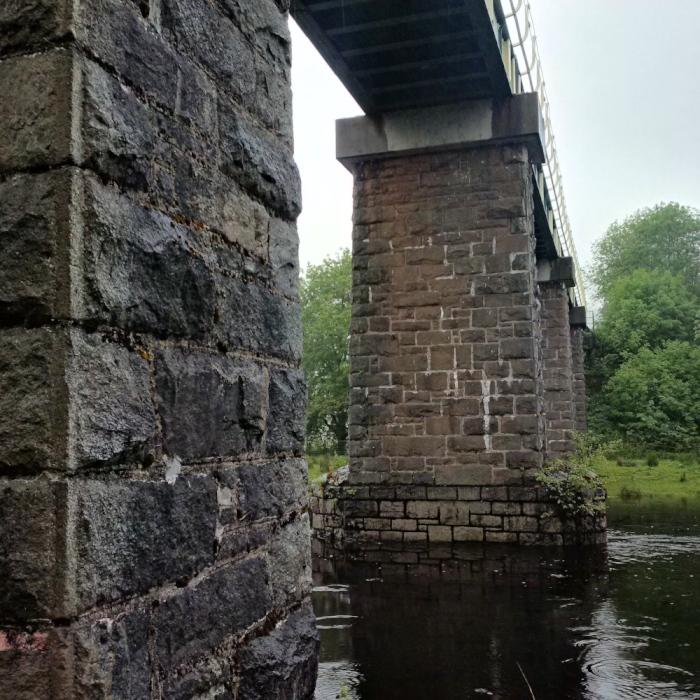 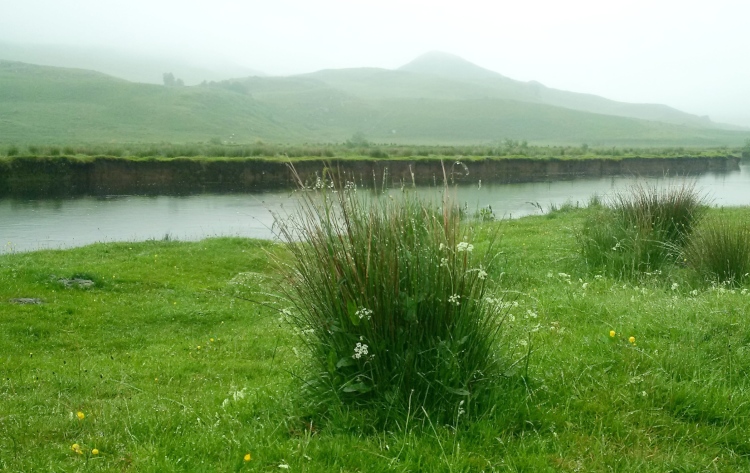 This visit then lead to the decision to build at least a small diorama of the viaduct over the river Fillan, where I can test a number of techniques for a potential larger layout. Namely, these are:
1. Foam insulation material as main material for segments
2. Track height regulation using screws
3. Construction of the steel bridge using printed photo paper
4. Color choices for ground covering turf
5. Tree building
6. Scale modelling using satellite images, plans and site images
7. Custom tracks based on the new â€œfine trackâ€ rails available

- to be continued soon -

Sounds like a really interesting project based on real place. Have fun building it. I really wait for the bridge !
Top

Hood luck with your layout.

I take it that it will be a run around layout with the bridge been the main focus of the ttraction.

Building a layout of a real location is a totally different ball game to building a fictional or semi-fictional layout....as I found out with The Bridge. Rather than being driven by what track sections , buildings, etc are available, you are driven by the desire to mimic actual things in scale to as close a level of realism as you can get.....and the satisfaction you get from people recognising even the simplest and most mundane features is indescribable.

And doing the modelling from a distance with few opportunities of being able to simply go and have a look has its own challenges. I've taken a look at the area in both Google Earth and Bing Maps and the quality of imaging is not as good as it could be....which may be problematic.....but nevertheless, I look forward with great interest and excitement to seeing pictures of this project during the build process....and wish you the very best with the project.
Doug Kightley
Webmaster here and volunteer at the National Tramway Museum http://www.tramway.co.uk
Top

thanks for your encouraging comments. Graham, currently I just plan a diorama without any other tracks. Maybe in a second step, I will add fiddle yards on both ends. The following plan shows how a potential Crianlarich layout could look like. According to my literature research, this is a quasi scale representation of the maximum amount of tracks lying around in the area - around 1920. The loop at Crianlarich lower was later removed. In the 1960s, the line was cut at Crianlarich lower and the station transformed into a timer loading range - with the loop re-installed. I am not saying that I will build all of this ... but maybe part of it 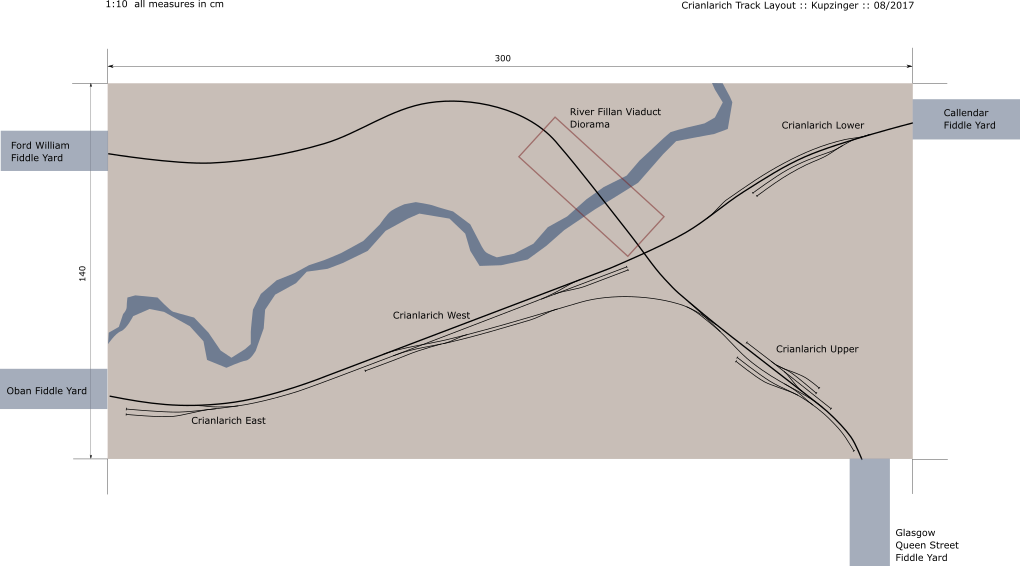 Doug, you are very right, modelling a real place is very special. This is the big strength of T, enabling to do that in a affordable amount of space...

As with my previous â€œScottish West Coastâ€ diorama, I chose the area quite small, this is roughly 20 x 55 cm. I easily printed the satellite image on two A4 sheets. Some cutting with a sharp knife resulted in the river bed. For the water, I used (again) some transparent plastic I once found in a DIY shop that has a wave-like structure. This is not ideal, because (as it turned out in the end) the middle bridge pillar will then â€œswim upâ€ on the water from certain view angles. Also, on a larger layout I will have to find other means. 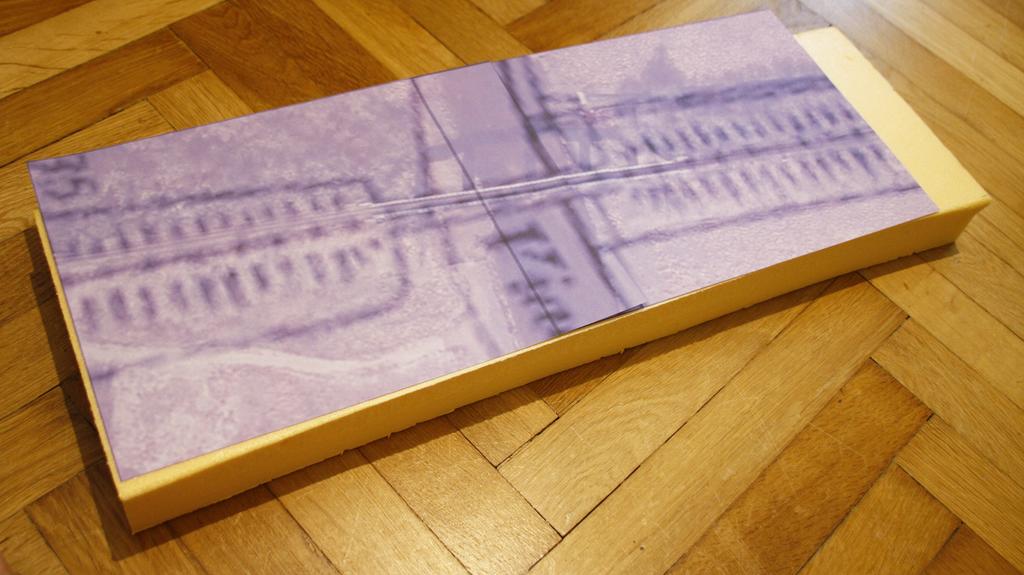 In order to achieve a level track bed, I used a few screws as adjustable stands. A little bit of plastering away the sharp edges and coloring followed. For the grass I again went for turf, planning to add 2 mm gras fibres at certain places. I used just two colors. Green close to the river and a brownish-yellow for the not too fresh grass away from the water. I observed this in an older aerial image. 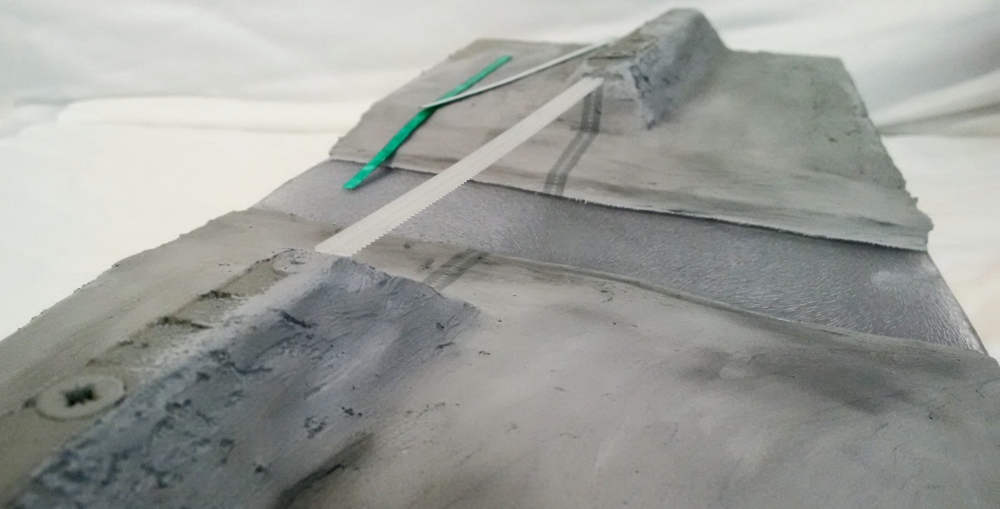 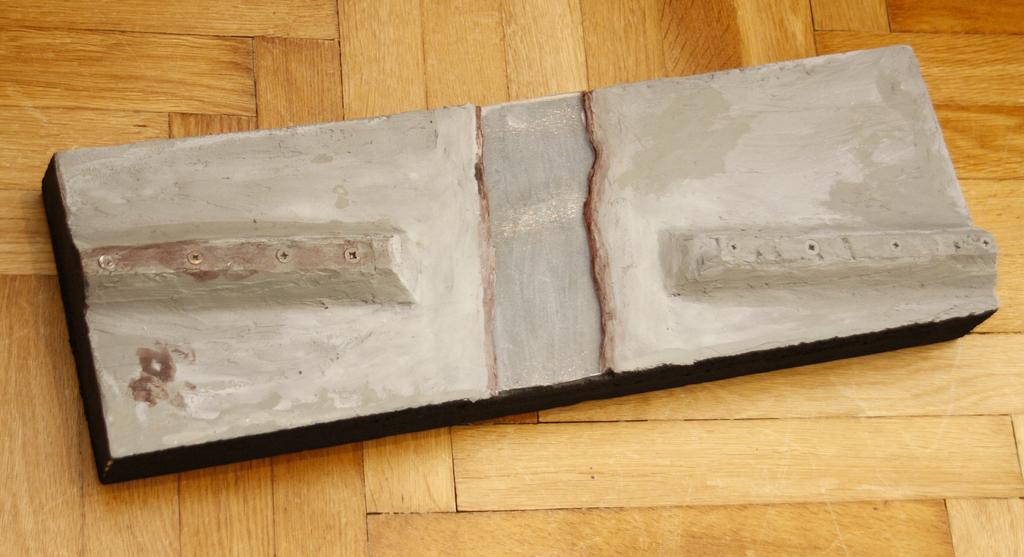 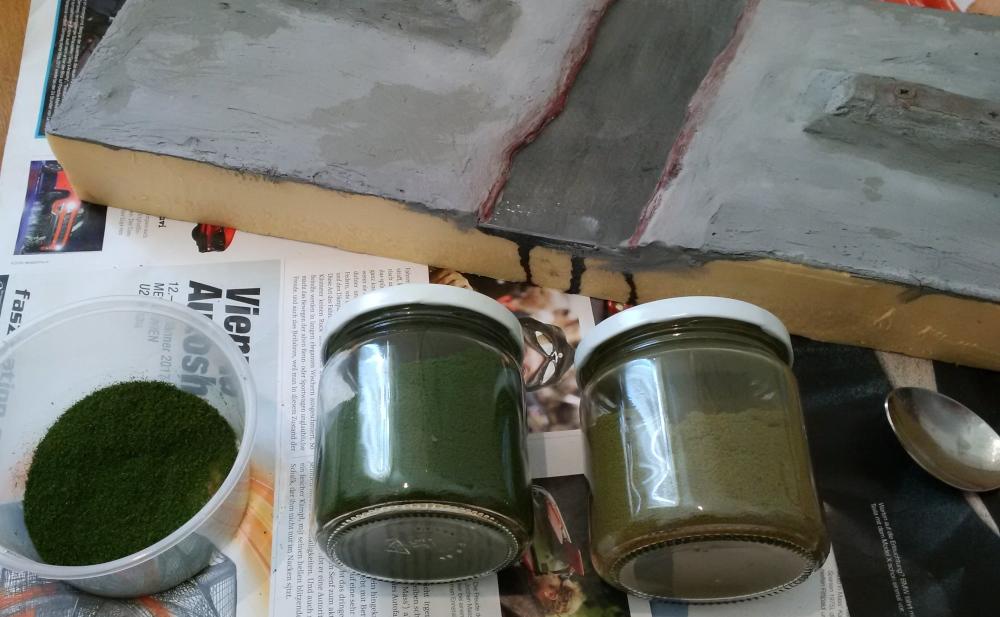 - to be continued soon -
Top

This is TGV style progress !
Top

actually this is not really real time footage, just sorting the material and writing up part by part.

What is obvious from the prototype image is that one thing is required most: trees. So, at one point in the process of building the diorama, I finally tackled this challenge. The best resource for tree modelling in T currently seems to be this: [Link] Unfortunately, I did not have the materials used there on hand, so I tried to alter some of my previous N scale tree building techniques.

While the natural material in Version 1 has enough detail and volume for an immediate leaf cover, Version 2 and 3 require a carrier material for the leafs. I had some Heki Flor on stock, which I cut into rough squares of 4 cm side length or so, and then pulled the material widely apart in order to achieve a quite transparent base. The limbs then can be â€œdressedâ€ with it.
For the foliage, I had only fine turf on hand. Even though the Heki Flor has already foliage, it is too coarse grain and also not enough after pulling apart the flor. In a first trial, I used spray glue, probably also a little bit too much. All the transparency was gone after dropping the leaves on top, and the glue left ugly white spots. 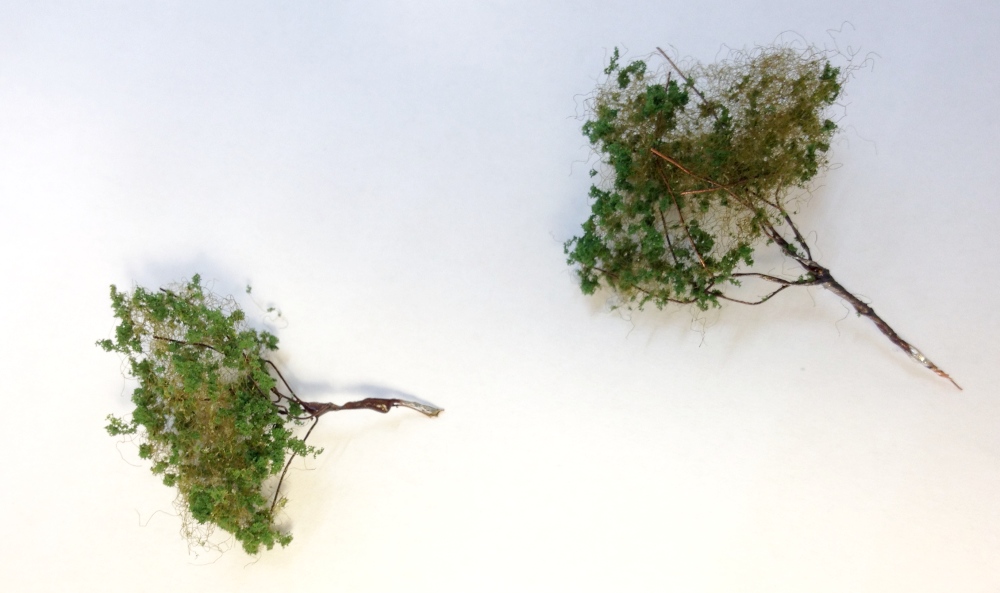 Above: Trunks with Heki Flor, no leaves added yet 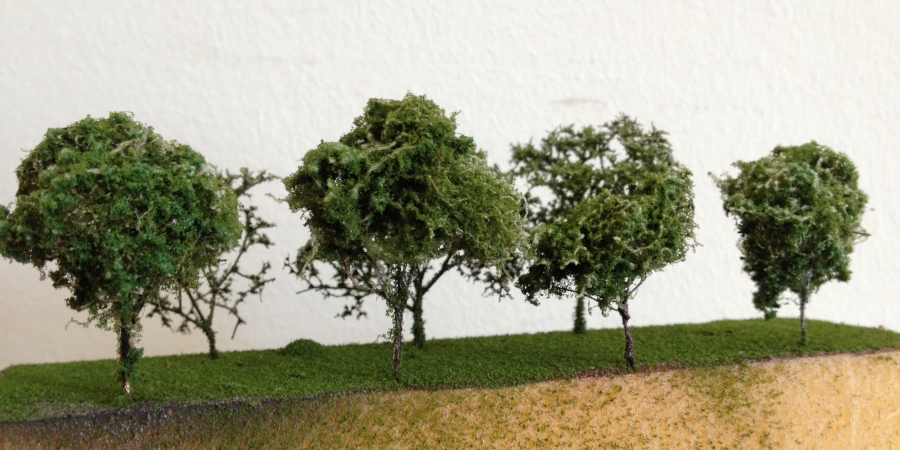 Comparing the results from the unfortunately spoiled first experiment, my conclusion is that version 3 â€œbottom-up thin wireâ€ is the best option to model the trunk.

Tree experiment 2
From what I learned in the first experiment, I decided to move to clear varnish, which worked very well. Two more â€œversion 3â€ trunks were made, and a fluffy Heki Flor dress added. Finally, dark green fine turf was glued on varnish sprayed over the tree, which also fixes the flor on the trunk. Using a pair of scissors, the trees were finally optimized in shape.
A test on the diorama was very encouraging. 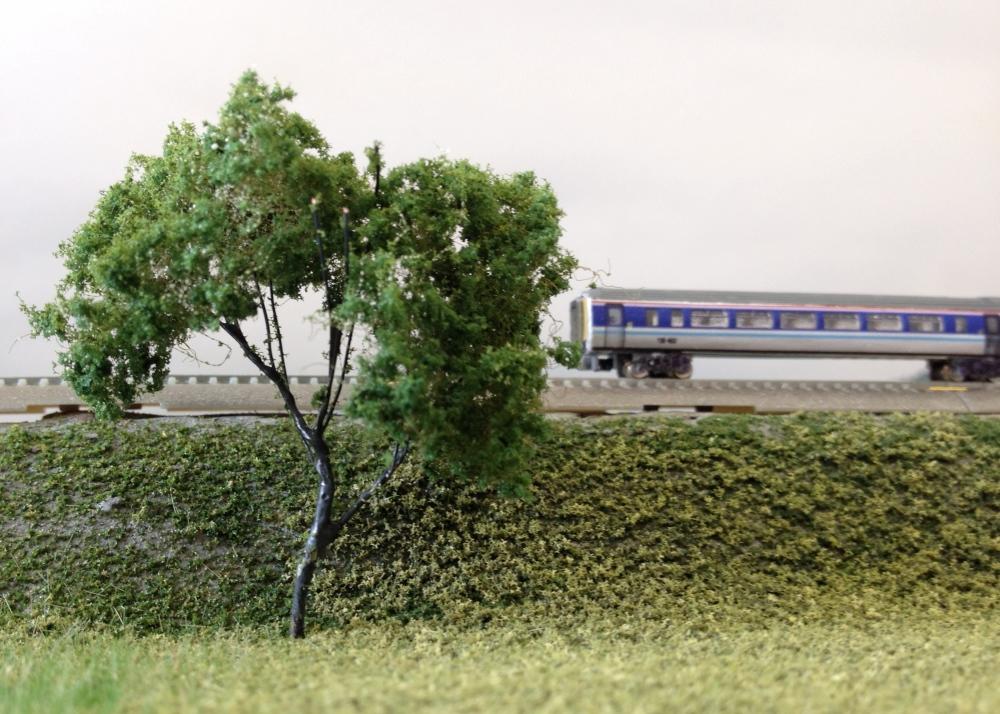 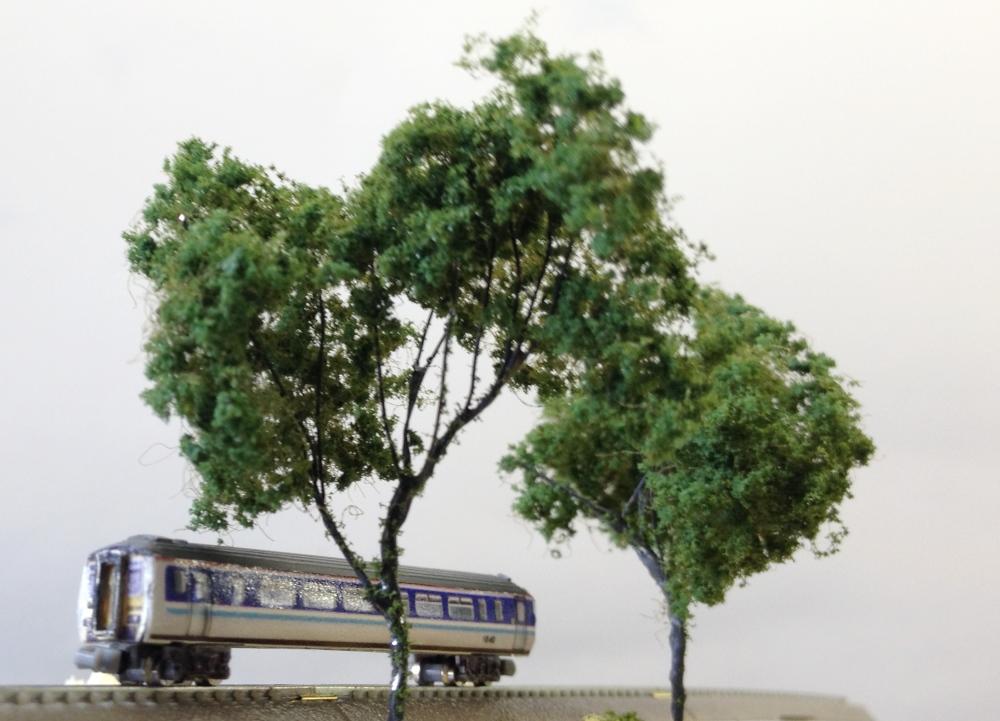 More trees
Using the above described technique, I build 22 more trees (hoping this is enough for the diorama) and also repaired the wire trees from the first experiment by pulling and adding more foliage. It took me a while to drill all the trunks. Coloring the trunks was quick; I used dark brown and dark gray spray colors. This needed to dry for more than 6 hours. â€œDressingâ€ the trunks can be done relatively fast and is fun. In bunches of three, I sprayed the varnish and added foliage. Finally, I used another layer of varnish to fix everything in place. Again, that was slightly too much â€¦ but a little bit of more foliage solved this issue againâ€¦ 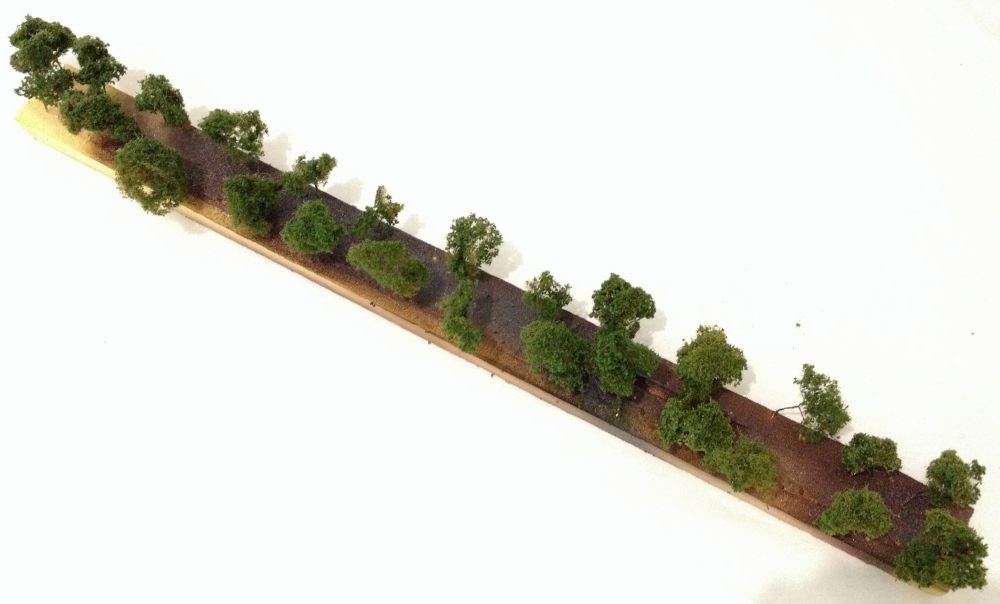 This is really great that you share your techniques. Trees look realistic. I can add one technique I used for 1:220 and 1:700 trees - see here: http://www.talkingtgauge.net/viewtopic. ... 7897#p7897
Especially look at the link to the video.

of course I have seen your trees!

They look great. Especially the last image. Thanks for the hint to the Polak fine turf. That is for sure useful.

But now, let's have a look on

After having estimated all measurements from satellite images and my own photos, I made the drawing shown in the beginning of this thread. The viaduct has a relatively simple shape and is made out of printed photo paper. I plan to add an etched railing in the final version. My first prototype however has to live without the railing. The pillars are made out of styrene (?) foam materal - "Styrodur" in German. Here they grow out of the water the first time. 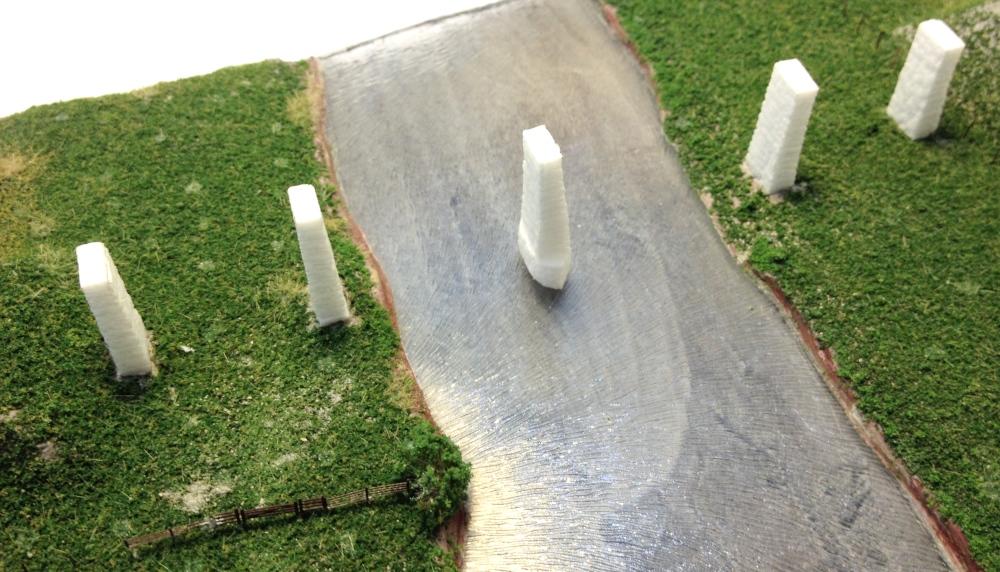 The central pillar unfortunately "swims" on the water surface. I will try to add some shiny varnish onto the water area to make it more reflective and less transparent. 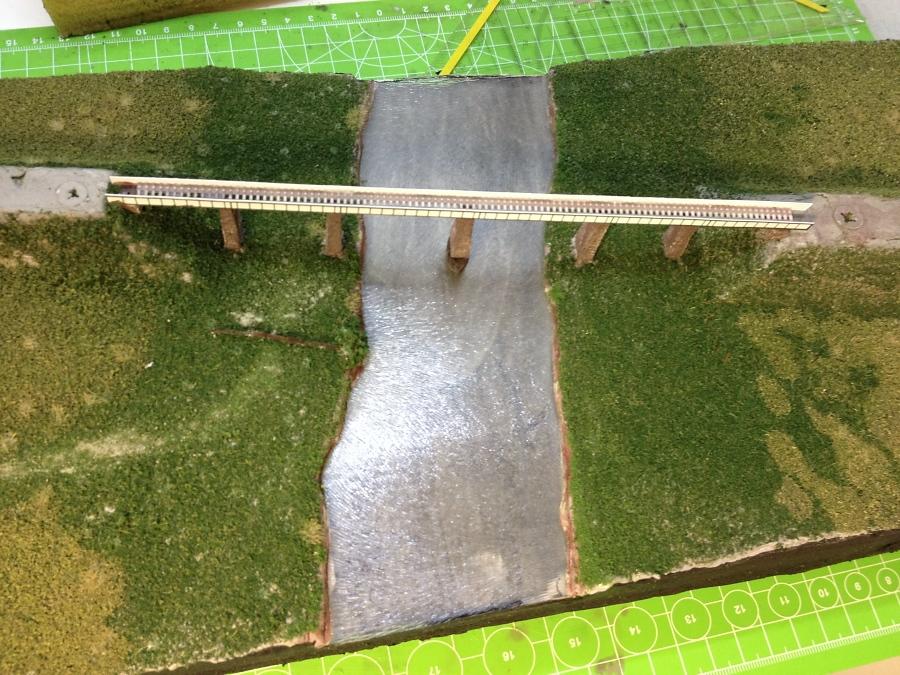 The base of the bridge is made out of a 3d print, which later will serve a sleepers for the rails. Because this is not yet the final design, the bridge is only a prototype.

As far as riwer pillar is concerned you can also imagine that there were a heavy rains last days and as a result of flood there are some pieces of trees and some other stuff anf rubbish around the pillar ...
Top

Hi zdrada69,
that is actually an excellent idea! I will try that.
Thanks
Friederich
Top

Ok, now it gets really exciting â€“ I put my 25 trees plus the bridge plus a little bit of etched fencing on the diorama. And here we are: just there in Crianlarich! Seen from most angles, it is not too obvious that track is still missing 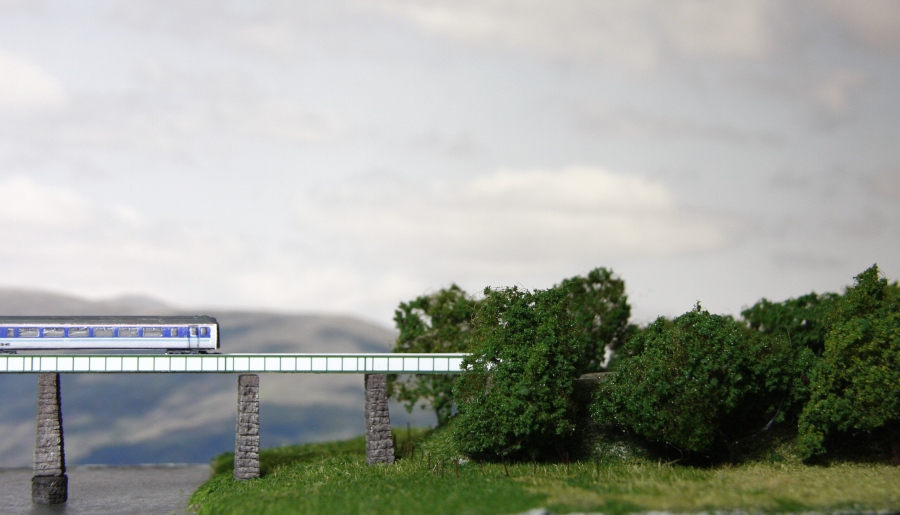 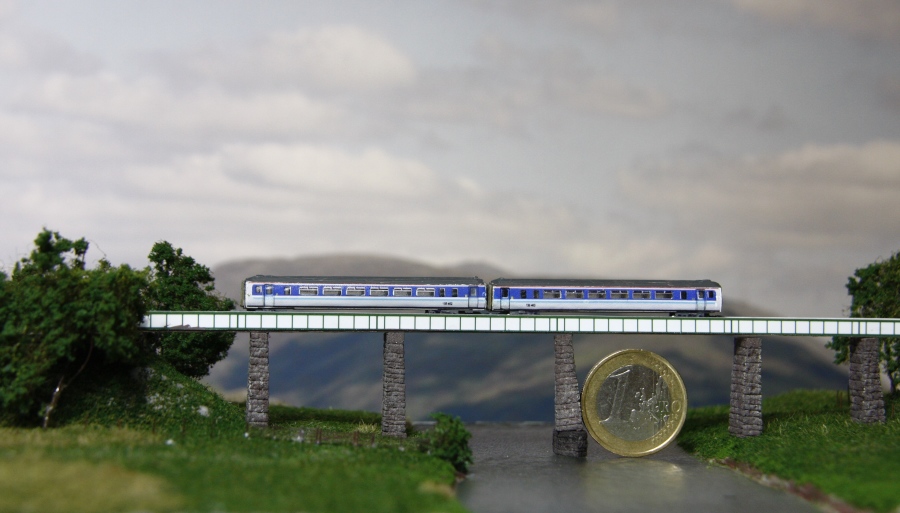 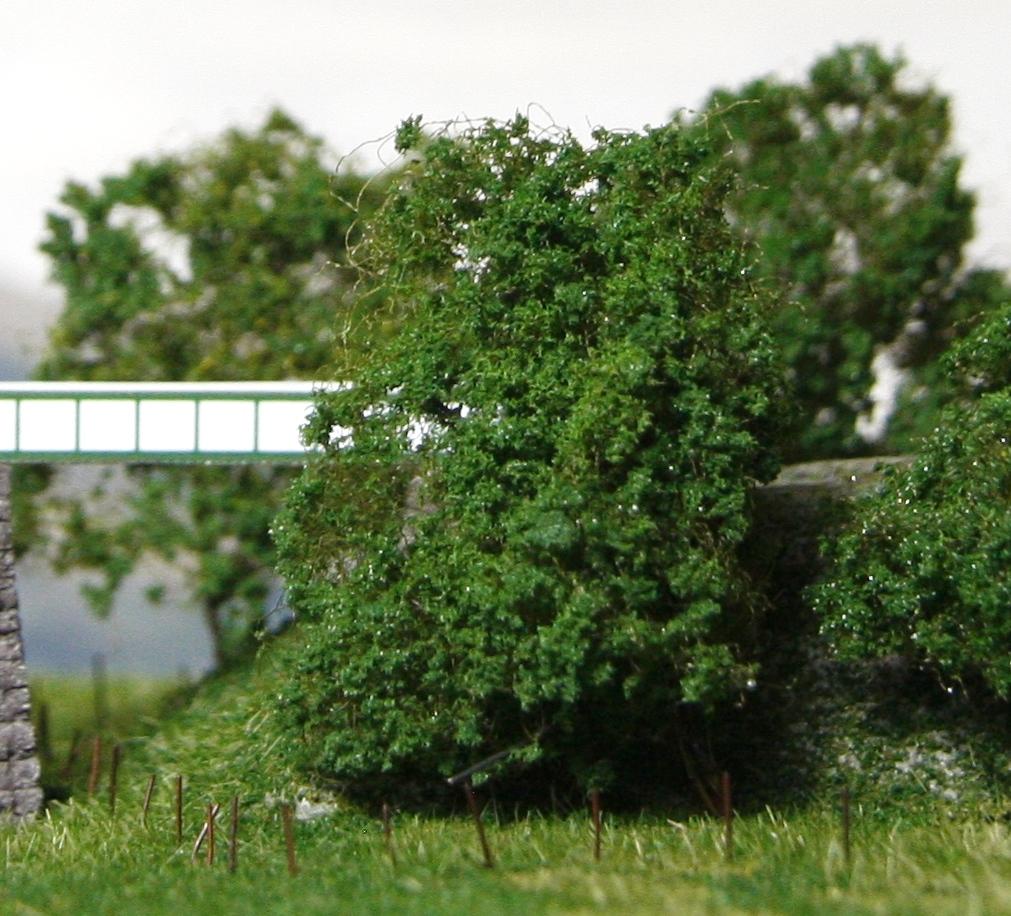 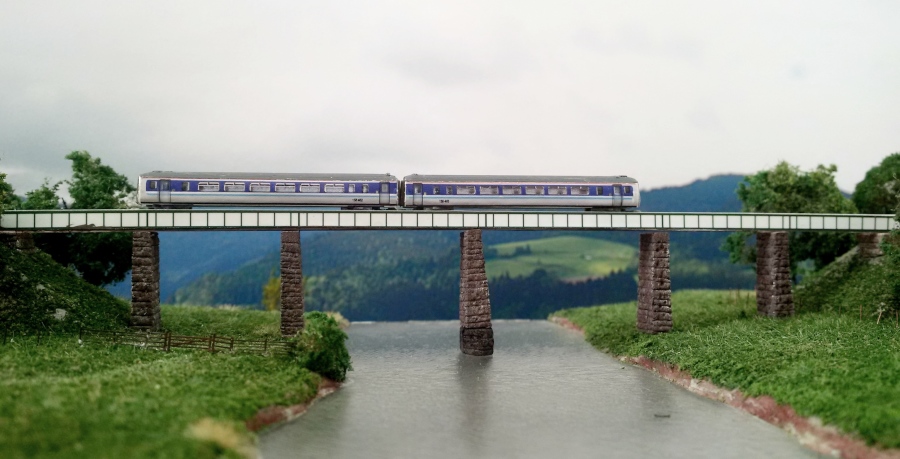 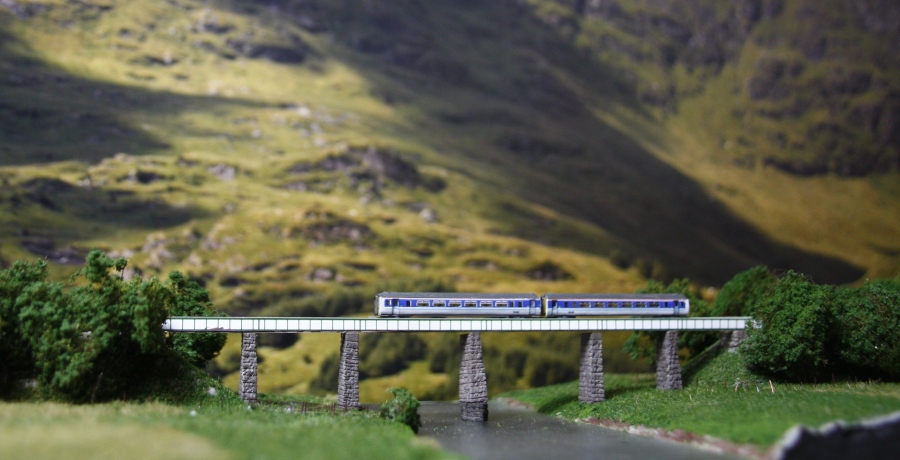 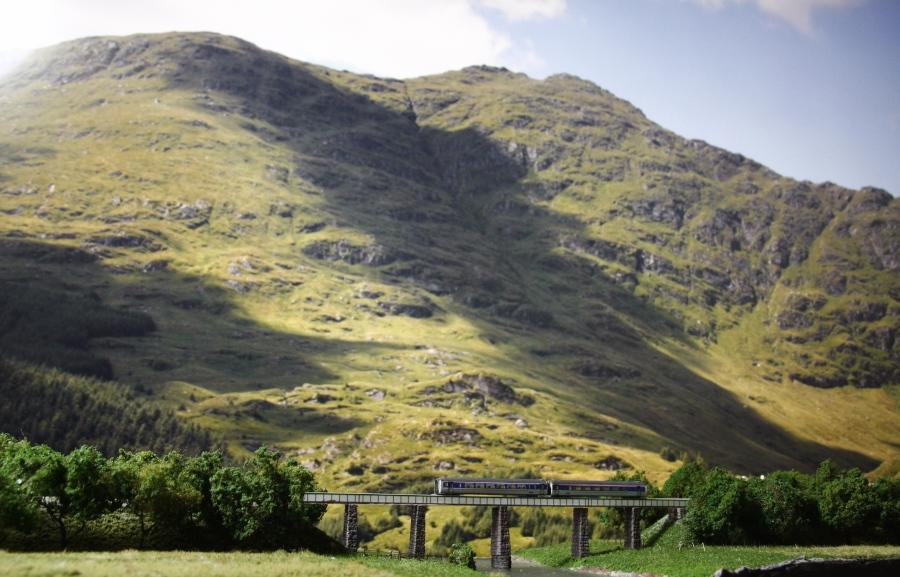 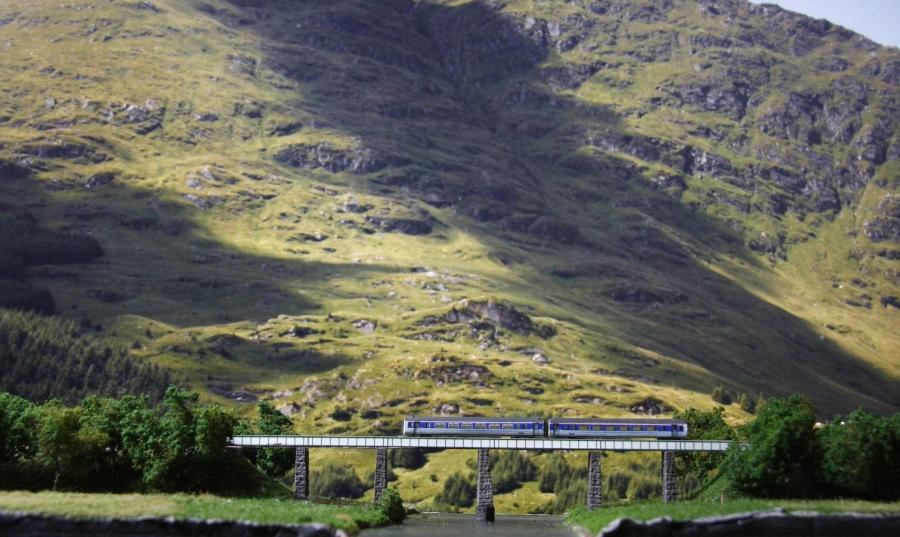 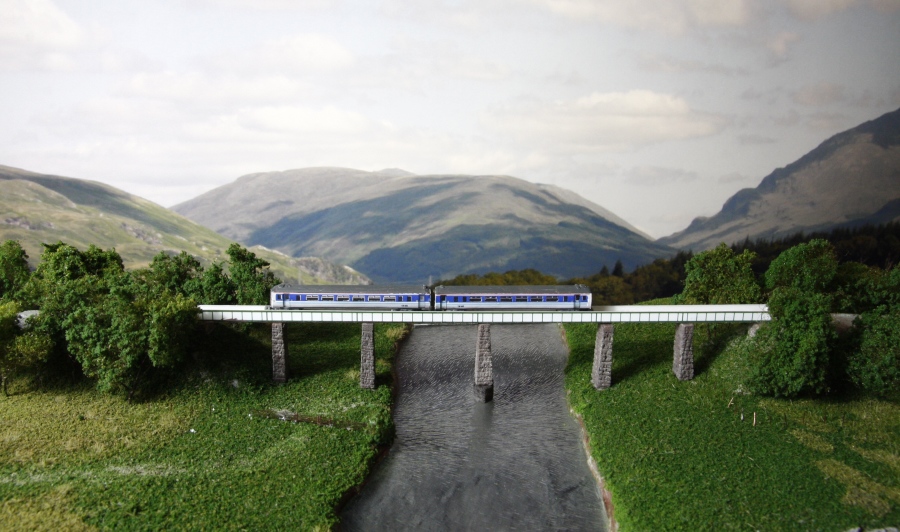 That's brilliant! Very realistic. What did you use to make the old fence that's perpendicular to the bridge?
Cheers,
Malcolm
Top

Hi Malcolm, the gate is etched. The poles are made by simple wires cut in short pices, sprayed in brown color and put into prepared small holes on the grass.
Cheers
Kupzinger
Top